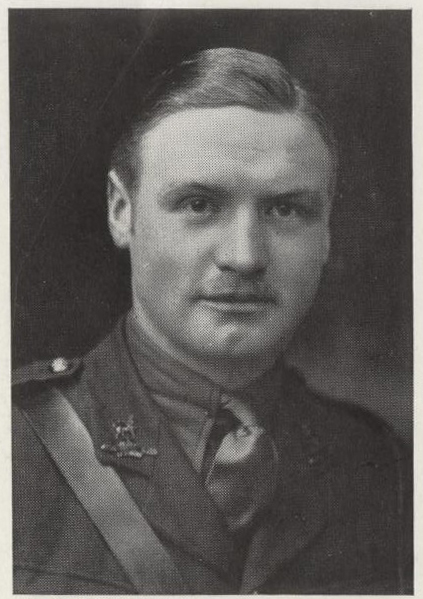 Born on August 17th 1896, John was the eldest child, and only son, of a medical doctor, Alfred Tennyson-Smith, and his wife, Catherine. He spent five years at the Prep before coming to the College in 1909, where he was a boarder in Ivyholme. In the school year 1914-15 he was a member of the 2nd XV, as well as serving as Captain of Boxing; this was to be his final year, as he left in the spring of 1915.

Shortly after leaving, in June 1915, John took a commission in the West Kent Regiment and that December was not only promoted to Lieutenant but also appointed Machine Gun Officer for his battalion. In April 1916 he went over to the continent for the first time and was sent to the front near Armentieres. He was wounded that summer, necessitating a month spent in hospital in Boulogne, and on his recovery was sent to the Somme. His conduct there saw him mentioned in dispatches, before eventually being transferred to Ypres the following February, at which point he was also appointed Battalion Intelligence Officer. On March 7th 1917, less than a month after being sent to the Ypres sector, he was killed in action at St. Eloi, five months short of his 21st birthday. In his memory was donated the Tennyson-Smith Memorial Cup, to be awarded to the outstanding scholar on the Science Side at Dulwich.