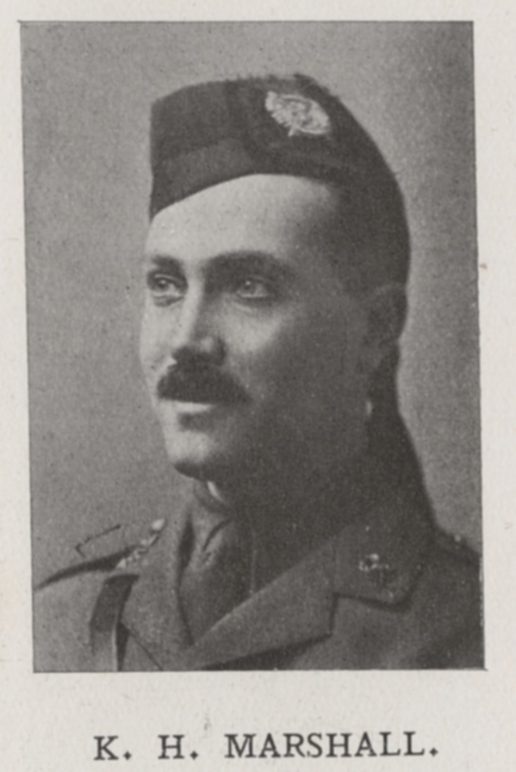 Keith was born on November 27th 1885, the son of civil servant Lumley Marshall, who had been born in Madras, India, and his wife, Martha. He began at the Prep and later went on to spend two and a half years at the College, joining at the beginning of 1899 and leaving in the summer of 1901. He went on to work at Lloyd’s of London, as an insurance underwriter.

Within days of the outbreak of conflict in the summer of 1914 Keith enlisted as a member of the London Scottish, going out to France with the 1st Battalion that September. He served across that winter at Messines, Givenchy and Cuinchy, largely as a scout. He was particularly useful at keeping in touch with French forces, as he was able to speak the language fluently. In February 1915 he was granted a commission and later that year took command of the battalion scouts and signallers at Loos, as well as running the mess at headquarters for several months. On October 6th 1915 he was severely wounded in the thigh whilst performing a reconnaissance mission near Hulluch, and as a result invalided back to England. Even upon his release from hospital, the injuries he had suffered rendered him ineligible for active service, although he did for a time hold an administrative position in the Royal Air Force, and also forced him to continue undergoing treatment. On August 15th 1920 he passed away in Guy’s Hospital, shortly after an operation which had been intended to deal with the lingering effects of his injury. He was survived by his widow, Cecil.

We have no Memorial Location details for Marshall, KH. Are you able to help? If so, please contact us.