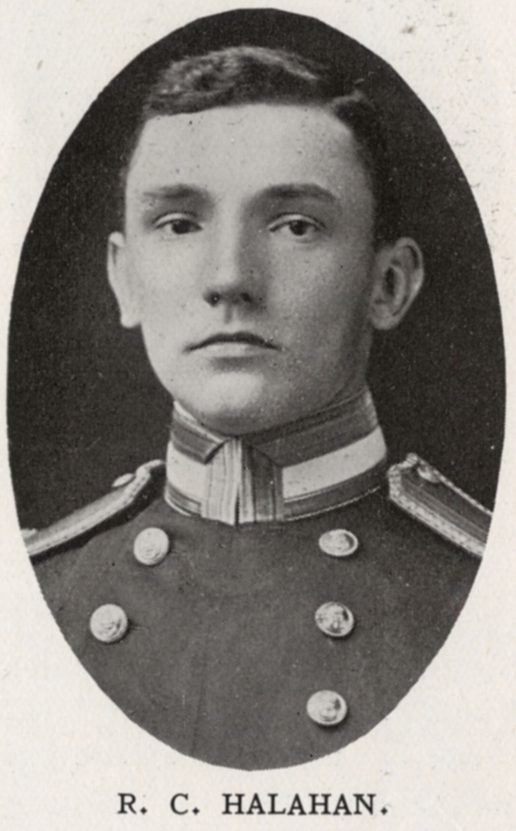 Robert was born on April 5th 1885, the youngest of six sons born to army doctor Samuel Halahan and his wife, Hannah, all six of whom would go on to become Alleynians. Robert’s time at Dulwich started at the beginning of 1897, and lasted just over three years, before he left in the spring of 1900 to become a cadet in the Royal Navy. In 1905 he was raised to the rank of Lieutenant, and the following year joined the nascent Submarine Service for several years; during this period, in 1907, he married Gwladys Williams, with whom he would go on to have two children. In 1912, during a period spent out of the submarines, he qualified as a pilot, before returning to the Submarine Service the following year, joining H.M.S. Maidstone.

Upon the outbreak of war, Robert was posted to Barrow, where the vessel he was to command was still being built. Upon its completion he was involved in the testing of wireless telegraphy at Christmas 1914, before, the following September, being transferred to the Baltic. Here he was placed in command of submarine E18, with many of its subsequent actions still being hidden in a shroud of secrecy. She was lost at sea sometime in late May or early June, although the date was officially recorded for naval purposes as June 12th, with Lieutenant-Commander Halahan and his crew later being singled out for commendation by Tsar Nicholas II of Russia, who took the highly unusual step of awarding Halahan the Russian Order of St. George posthumously. His elder brother, Henry, would later die during the raid on Zeebrugge in April 1918.