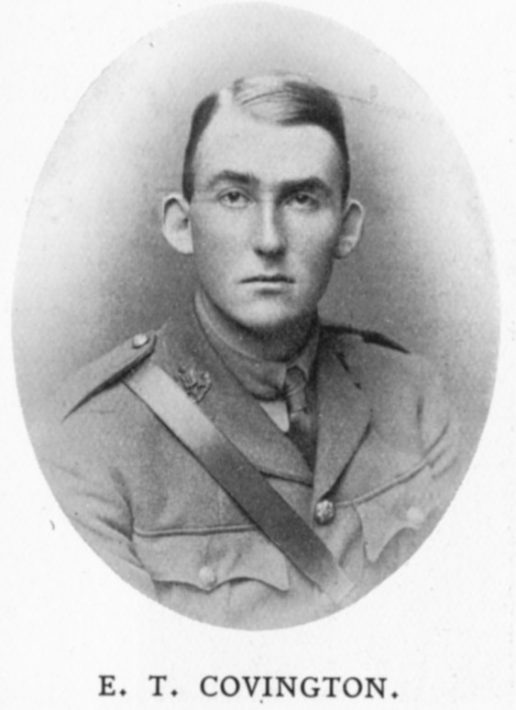 Born on February 6th 1896, Edwin was the eldest son of a postal contractor, also called Edwin Covington, and his wife Amy. He spent three years at the College, leaving in the summer of 1912, two years before his younger brother, Cyril, was to start. He went on from Dulwich to take a position working with his cousin as a surveyor, later qualifying as a member of the Surveyors’ Institute.
In September of 1914, the first full month of the War, Edwin volunteered as a member of the Royal Naval Division, but shortly after came down with a severe chill, which resulted in ear trouble so serious that he was invalided out of service. In February 1915, having recovered, he signed up once more, this time as a Private in the Public Schools Battalion, with whom he went to France later that year. In March 1916 he returned to England in order to train for a commission, which he received in August with the East Surreys. In November of 1916 he was sent to Mesopotamia attached to the Loyal North Lancashire Regiment, and was wounded in the shoulder, but returned to his unit in time for the recapture of Kut on 23rd February 1917. Not long after, on the night of the 8th of March, he was involved in the crossing of the Dialah River when he was killed attempting to recover a sinking pontoon whilst under heavy machine gun fire.