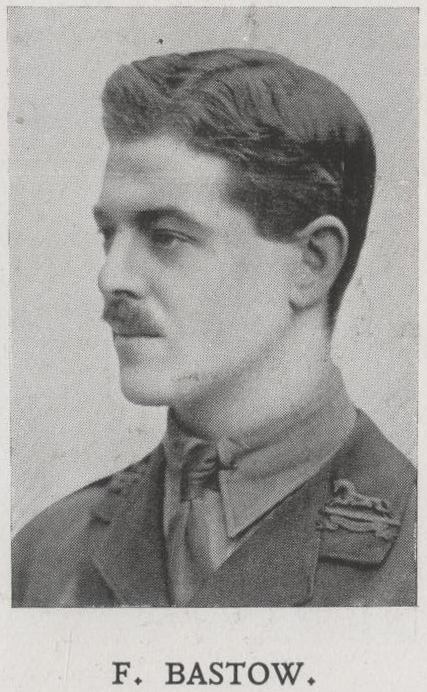 Frank was born on the 14th of July 1893, the son of Thomas and Margaret Bastow, although by the time he left Dulwich his guardian was listed as his stepfather, the Rev. Alfred Starling, of Darlington, meaning that by this point he was also a boarder in Ivyholme. In his final year at the College he served as a member of the 2nd XV as well as the cricket 3rd XI, also winning the Challenge Cup for Fives. After leaving Dulwich he went to Clare College, Cambridge on a mathematical scholarship, with the intention of taking an engineering degree.

After only two years, however, the War broke out, and Frank at once signed up, being granted a commission in the West Yorkshires in September 1914. In March of the following year he was sent to the Front, at first to Armentieres;, in June he was promoted to Lieutenant, and shortly afterwards transferred to the Ypres salient where he was to serve for almost a full year. In August of 1916 the Battalion was transferred to the Somme and the next month Frank was severely wounded in the right elbow, necessitating an eighteen month period of recovery at home and rendering his arm permanently bent. Whilst recuperating he was promoted to Captain and in April 1918 was sent to France once more. He died near Reims on 27th May 1918, during an action in which practically his entire Battalion was wiped out, leaving a surviving fiancée, Doris Swan. His younger brother, Norman, a fellow OA and member of the West Yorkshires, also fell in action.