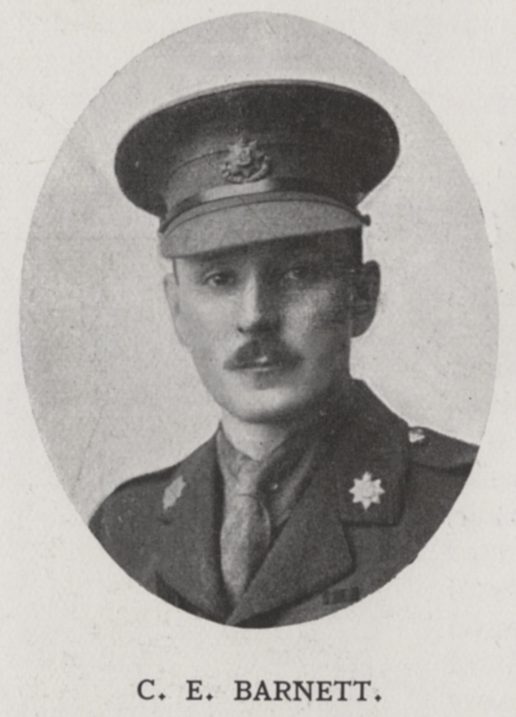 Charles was born on June 22nd 1882 in Lewisham; his father, also called Charles Edward Barnett, was a judge who would go on to hold a prominent position at the High Court. After he had left Dulwich, in 1900, he went out to South Africa to serve with the Cape Mounted Police in the Boer War, remaining for the rest of the conflict and earning the S.A. Medal. After this he stayed in Southern Africa, working as an engineer in the gold mines. Having been forced to return home as a result of ill health, in 1912 he went out to Canada in order to take a position at the Hollinger Gold Mine in Timmins, Ontario.

He returned to England upon the outbreak of hostilities in the summer of 1914 and at first joined up as a member of the Empire Battalion, Royal Fusiliers, before, in February 1915, taking up a commission in the 9th Battalion of the East Surrey Regiment. In July he was promoted further, to the rank of Captain, and a month later proceeded to France for the first time. He was seriously wounded during the Battle of Loos on September 25th and taken prisoner, dying at the German-held Douai Hospital on October 8th 1915. He was survived by his widow, Kathleen.