Back to Tottenham, CGL 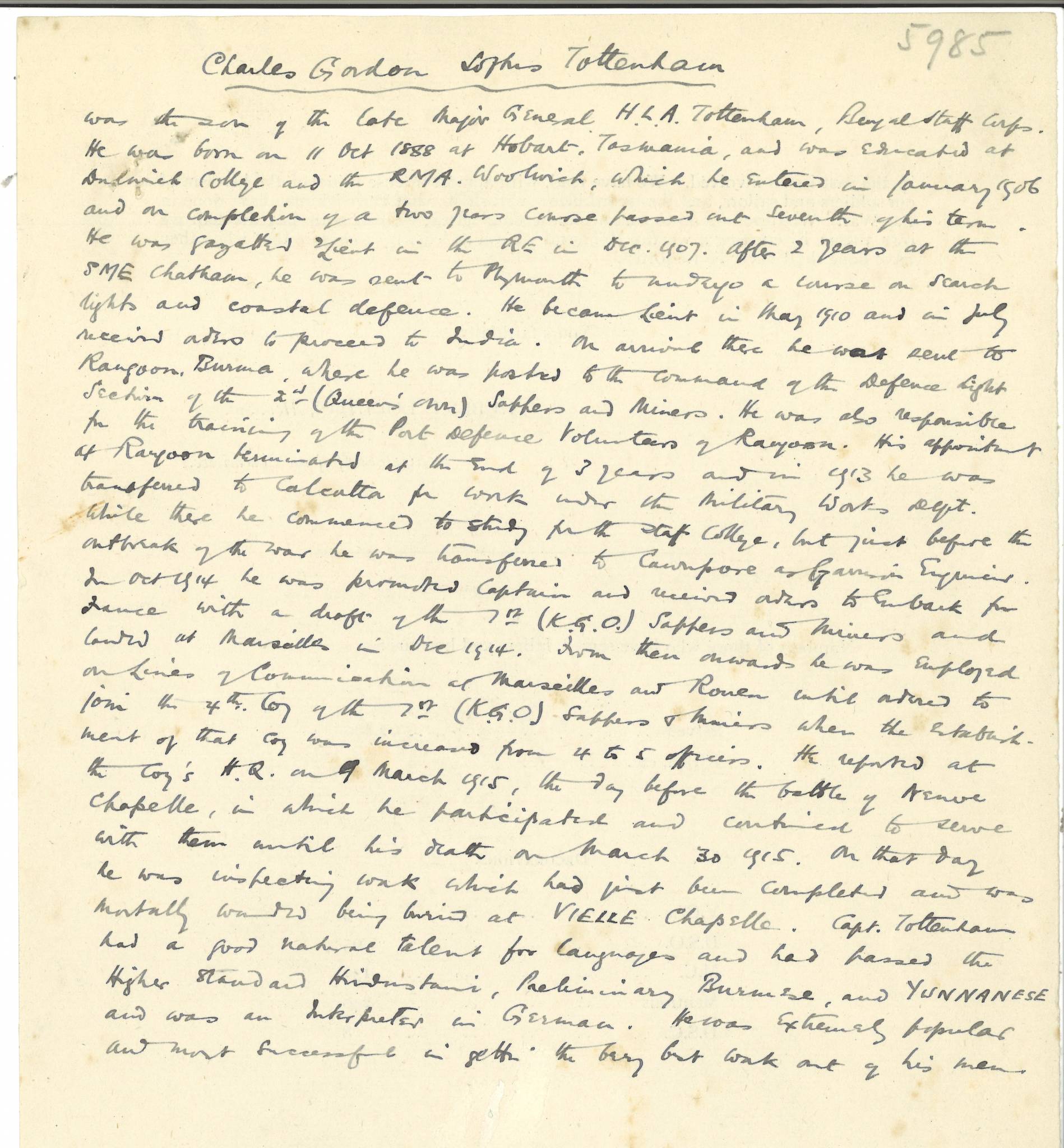 Was the son of the late Major General H.L.A. Tottenham, Royal Staff Corps. He was born on 11 Oct. 1888 at Hobart, Tasmania, and was educated at Dulwich College and the RMA Woolwich, which he entered in January 1906 and on completion of a two year course passed out seventh of his term. He was gazetted Lieut. in the R.E. in Dec. 1907. After 2 years at the SME Chatham, he was sent to Plymouth to undergo a course on search lights and coastal defence. He became Lieut. in May 1910 and in July received [a note???] to proceed to India. On arrival there he was sent to Rangoon, Burma, where he was posted to the command of the Defence Light section of the 2nd (Queen’s Own) Sappers and Miners. He was also responsible for the training of the Port Defence Volunteers of Rangoon. His appointment at Rangoon terminated at the end of 3 years and in 1913 he was transferred to Calcutta for work under the Military Works Dept. While there he commenced to study for the Staff College, but just before the outbreak of the war he was transferred to Cawnpore as Garrison Engineer. In Oct. 1914 he was promoted Captain and received orders to embark for France with a draft of the 1st (K.G.O.) Sappers and Miners and landed at Marseille in Dec. 1914. From then onwards he was employed on lines of communication at Marseille and Rouen until asked to join the 4th Coy. of the 1st (K.G.O.) Sappers & Miners when the establishment of that Coy. was increased from 4 to 5 officers. He reported at the Coy.’s H.Q. on 9 March 1915, the day before the battle of Neuve Chapelle, in which he participated and continued to serve with them until his death on March 30 1915. On that day he was inspecting work which had just been completed and was mortally wounded being buried at VIELLE Chapelle. Capt. Tottenham had a good natural talent for languages and had passed the Higher Standard Hindustani, Preliminary Burmesse and YUNNANESE and was an interpreter in German. He was extremely popular and most successful in getting the very best work out of his men.