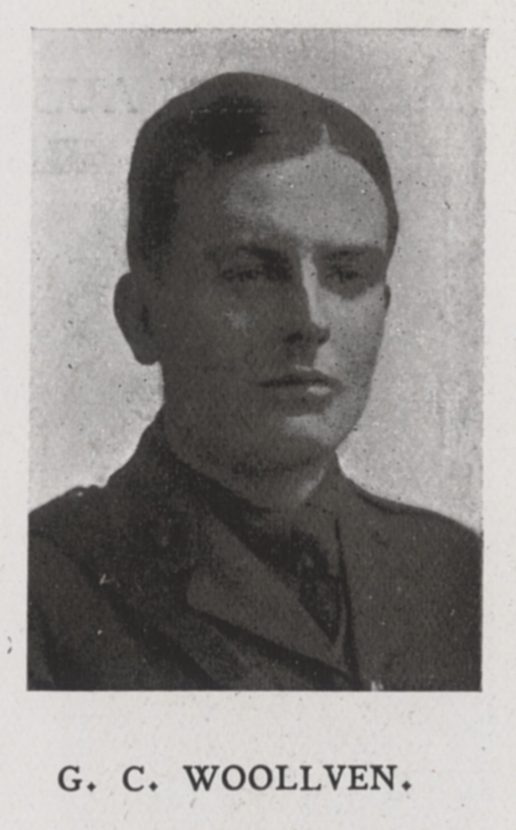 Born 8th October 1905, Gerald was the son of Walter Woollven, a senior civil servant, and his wife Agnes. He had two older brothers at Dulwich. After leaving Dulwich in 1913 he pursued further studies in architecture and surveying at the Battersea Polytechnic. Shortly after commencing his course at the Polytechnic he joined the London University Officers Training Corps.

When war broke out Gerald was encamped with the OTC on Salisbury Plain, where they were undergoing their annual training exercise. He enlisted in the newly formed Manchester Regiment, with whom he trained at Crowborough and Colchester until the summer of 1916, when he began training for a commission in the Royal Artillery at Lord’s Cricket Ground and at Larkhill. He received his commission in January 1917, and proceeded to France in March. He was attached to C Battery, which served in the ‘Death Valley’ at Bullecourt and later on at Passchendaele. Whilst at Passchendaele Gerald’s men suffered heavy casualties, and Gerald himself was gassed. In March 1918 Gerald was given command of an isolated post at St. Quentin, around which intense fighting took place during the German Spring Offensive. During his time in command of the post Gerald gained a reputation for conspicuous bravery, and the two guns under his command killed or wounded three in every four German soldiers in the area. Gerald himself received shrapnel wounds to the head and feet. He was twice recommended for the Military Cross, and in July was promoted to Lieutenant. On 8th August Gerald’s guns were responsible for the total destruction of a nearby German howitzer position, and later that day he and his men captured a German soldier. On 10th September 1918 Gerald was patrolling with two signallers from his battery near Epéhy in Picardy. Gerald and one of the signallers went missing during this patrol, and stumbled upon a German machine-gun nest. The Germans opened fire, and both men were wounded. Gerald was carried into the nest, where he died of his wounds half an hour later. He is buried at the Epéhy Wood Farm Cemetery.