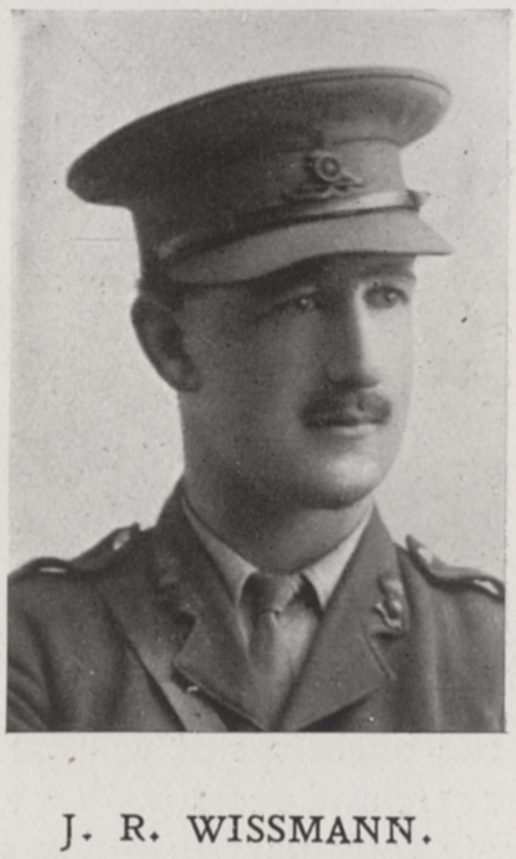 Born 23rd October 1890, John Wissman, the son of a member of the stock exchange, Rudolf Wissmann and his wife Milley. He entered the college with a junior scholarship from Dulwich College Preparatory School and in 1909 passed into the Royal Military Academy, Woolwich, where he was an excellent horseman, won prizes for his German and qualified as an interpreter. After passing out in December 1910 he took a commission in the Royal Field Artillery.  He joined the 22nd Battery at Bulford Camp, moving with his Brigade, the 34th, to Aldershot in 1913, in which year he was promoted to Lieutenant. He was a very keen soldier and spent his army leave in Belgium learning about the country and its communications as he was convinced Germany intended to invade France via Belgium.

Within three weeks of war being declared, on 18th August, 1914, John went with the Second Division to France. He was continually in action from the 23rd August, taking part in the retreat from Mons and subsequently the battles of the Marne and the Aisne.  He was killed in action near the village of Verneuil on the Aisne on 15th September 1914, the first fatality of the war who had been a resident of Dulwich Village. He left a widow, Gladys, nee Jukes, the daughter of a missionary, and their daughter Joan, who would be born posthumously in February 1915. His widow founded the John Wissmann Memorial Prize at Dulwich College in his memory for boys who obtained the highest marks in the entrance exams for Woolwich and Sandhurst. In 1915 his father signed a letter to the Times written by a group of naturalised Germans and Austrians, condemning Germany’s military aggression and expressing their loyalty to their adopted country. 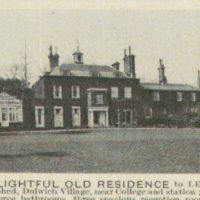 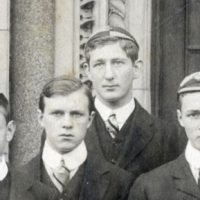 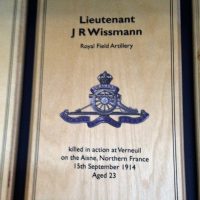