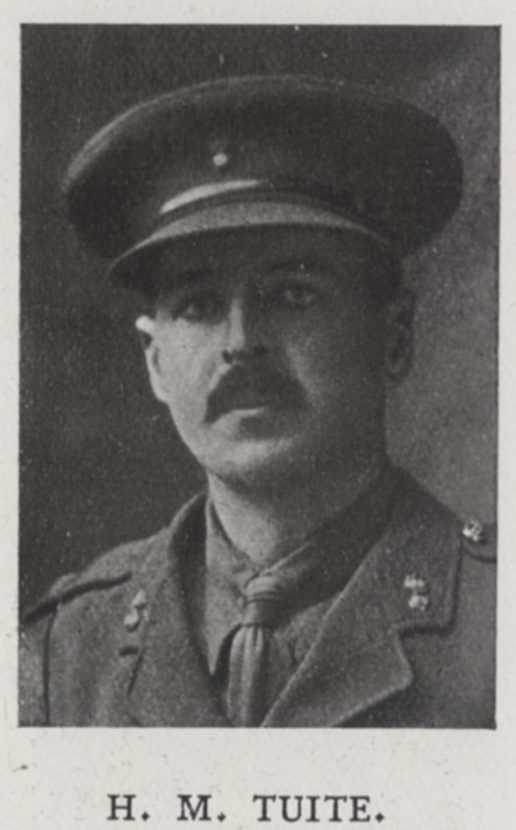 Henry was born in Madras, India, on September 24th 1885, the only child of Mark Tuite, a Colonel in the Indian Army, and his wife, Madeline, who had herself been born in Madras. He joined the College at the start of 1901 and was a pupil for just over three years, leaving in April 1904 whilst a member of the Army Class. After Dulwich he took up a place at Sandhurst, where he was a cadet for just over a year before passing out in the summer of 1905, to take up a commission in the Border Regiment. Just two years later, however, he resigned his commission and left the Army.

When war was declared in the summer of 1914 Henry rejoined the Army, taking up a commission in the 3rd Public Schools Battalion, Royal Fusiliers, of which he was also made adjutant. He went on to be promoted to Captain in the Royal Munster Fusiliers before receiving another promotion, to Major, at which time he became second in command of the 26th Battalion, Royal Fusiliers. In 1917, whilst serving in France, he became a Lieutenant-Colonel, at the same time as being placed in command of the battalion. Later that year he and the unit were transferred to Italy to serve as part of the 41st Division and while serving there he was mentioned in dispatches on two separate occasions. In the spring of 1918 they were sent back to France where they were posted in the Arras sector, just in time to face the German Ludendorff Offensive that March. He was reported wounded and missing after an engagement on March 24th and was later officially declared to have died on that date.