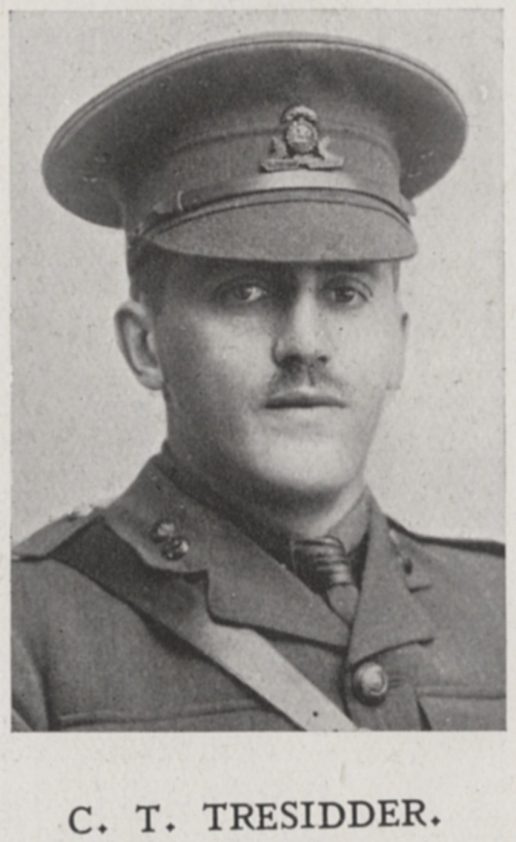 Charles was born on April 26th 1888 in Yorkshire, the youngest of three sons of John Tresidder, an Indian-born army Captain, and his wife, Amy. The family had a particularly strong connection to Dulwich as not only did Charles and both his brothers attend the College, but their father had been one of six brothers to do so, and seven of their cousins were also Alleynians. Charles himself started at Dulwich in September 1902 and would go on to be a pupil at the school for just over three years. After leaving he eventually took up a position studying medicine at St. Bart’s, where he had been due to take his final exams in early 1914 but was prevented from doing so when he broke his leg whilst representing the hospital at rugby.

Upon Charles’ recovery war had broken out, and as a result he went over to France, spending three months of late 1914 as a volunteer dresser at the Duchess of Westminster’s War Hospital. In January 1915 he enlisted in the Lancashire Fusiliers and received his commission shortly afterwards. That May he was promoted to Lieutenant and only a few days later was promoted once more, at first on a temporary basis, to Captain. Later that year he transferred to the Gloucestershires,with whom he went out to Egypt that November. After several months in Egypt he was sent to what was then called Mesopotamia, modern-day Iraq, in March 1916, where he was appointed Machine Gun Officer. Several weeks later, in mid-April, he received a serious stomach wound which he succumbed to a few days afterwards, on April 22nd 1916, whilst in a hospital in Amarah. He was survived by his widow, Lilian, whom he had married in the autumn of 1915, and their son Charles, just six weeks old at the time of his father’s death.