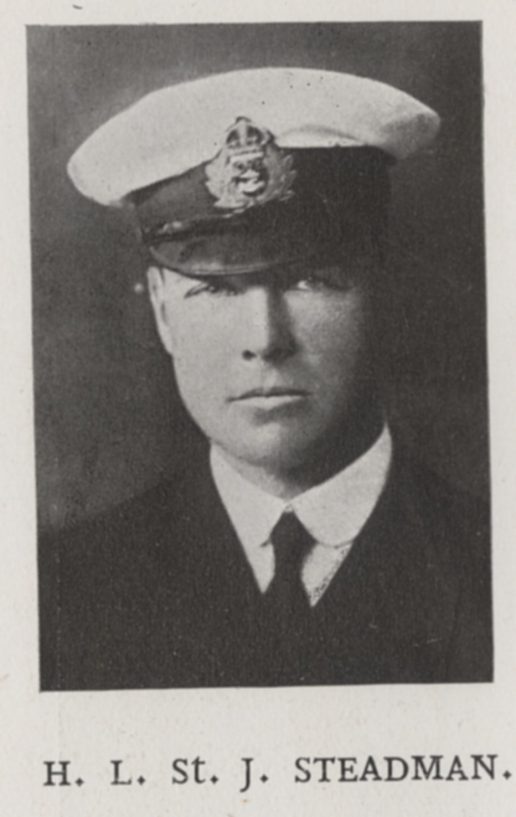 Born on June 21st 1883, Harold was the middle of three sons, all of whom would go on to attend the College, who were among seven children born to a solicitor, Sidney Steadman, and his wife, Mary. He started at Dulwich in May 1894 and was a pupil for the next five years, leaving in the spring of 1899 whilst a member of the Classical Upper Fourth. From the College he went on to become a solicitor, fully qualifying in 1908. Following this he went over to British Columbia, Canada, where he was a practising lawyer.
Shortly after the declaration of war in 1914 Harold enlisted in the Canadian Army but not long afterwards transferred to the Navy. He had risen to the rank of Petty Officer when in 1916 he was given a commission in the Royal Naval Volunteer Reserve. In 1917 he was promoted to Lieutenant and subsequently spent time on the Q Ship programme before commanding the M.T. Thomas Bryan in the Mediterranean. In late 1918 he was invalided home to England for a time before volunteering to work in minesweeping off the Kent coast. He was demobilised in October 1919, and subsequently bought a vessel, intending to trade between France and England. He had never truly recovered from the after effects of a period in the sea after having been sunk during his naval career, however, and passed away as a result on January 30th 1920, whilst at sea off Ramsgate. He was survived by his widow, Josephine, and their daughter, Eileen.

We have no Memorial Location details for Steadman, HLSJ. Are you able to help? If so, please contact us.