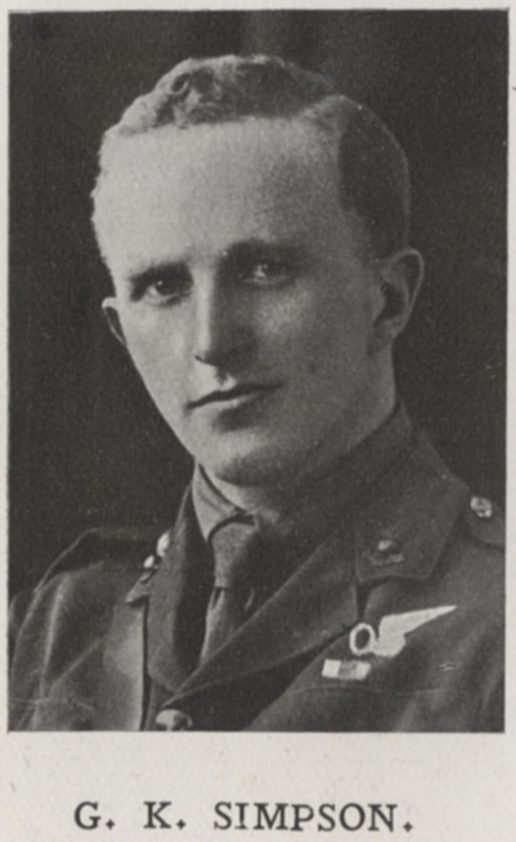 Born on January 5th 1891 on the Wirral, George was the son of Henry Simpson and his wife, Emily. He spent time at Clare House School in Beckenham before coming to the College in September 1904, the third of four brothers to do so. He was a pupil for only a year, leaving in the summer of 1905 whilst a member of the Modern Lower Third. After Dulwich he went out to Canada and by 1910 was a landowner at Fort George, British Columbia, modern day Prince George.
In September 1914 George enlisted as a member of what would go on to be the 2nd Canadian Contingent, but that November was granted a discharge in order that he could make his own way to Europe and join the fighting sooner. He came to England and was granted a commission in the Royal Garrison Artillery in March 1915 before transferring to the Royal Flying Corps that October. He was sent over to the front for the first time in May 1916, serving as an observer with the 14th Kite Balloon Section. He served through the Somme during which time he was promoted to Lieutenant and later given the role of Balloon Commander in February 1917. On March 1st the balloon he was in was hit by enemy incendiary fire. George refused to abandon the balloon until he had helped his fellow observer clear first, and as a result was caught up and enveloped in the burning remnants whilst parachuting to the ground. He was severely burnt and died from his injuries, six days later, on March 7th. He was posthumously nominated for a Military Cross which was awarded six weeks after his death.