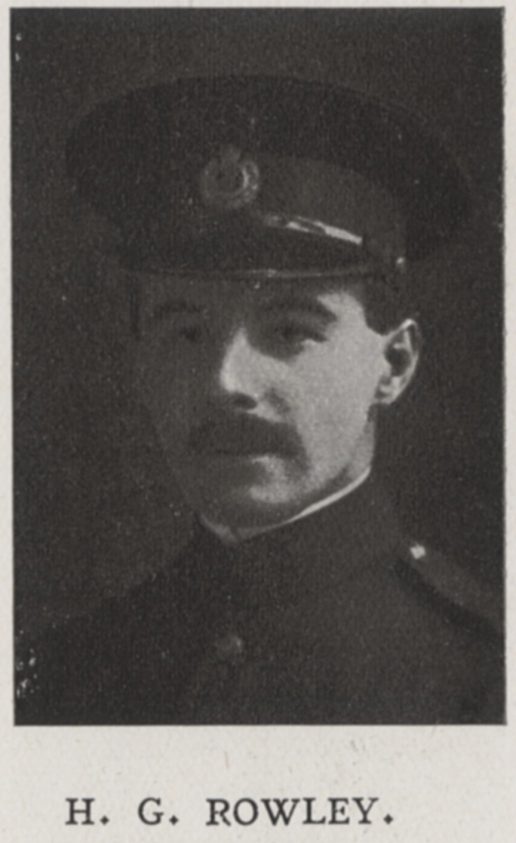 Faubourg D'Amiens Cemetery, Arras. I A 1

Harold was born on the 1st of August 1884, the third of four sons born to bank clerk John Rowley and his wife, Harriet. He joined the College at the start of 1900 alongside his younger brother Ernest and was at Dulwich for the next eighteen months. After leaving in summer 1901 he took up a place at King’s College, London, where he studied engineering, graduating in 1904. From university he took up a place with the Cwmaman Coal Co. of South Wales, where he spent just over a year learning about mining, then subsequently went out to Muzaffarpur in India, where he was employed for two years by Messrs. Boss and Co. A downturn in business necessitated a return to England in 1908, where he took up a commission as a reservist in the Royal Engineers. After a year of training he moved out to Canada where he worked for a time in railway construction and then irrigation before settling in Kelowna, British Columbia.
Whilst living in Canada Harold had resigned his commission because of the difficulties of undertaking some of the required work whiet living and working over there, but upon the outbreak of war in 1914 he returned to England and once again offered his services to the War Office. He returned to the Royal Engineers in the rank of Lieutenant. In August 1915 he went over to the front for the first time and was for the next seven months or so involved in near continuous fighting around Ypres. In March 1916, while at Arras on a break from the front lines, he was taken seriously ill with meningitis, from which he passed away on the 17th at the age of 31.