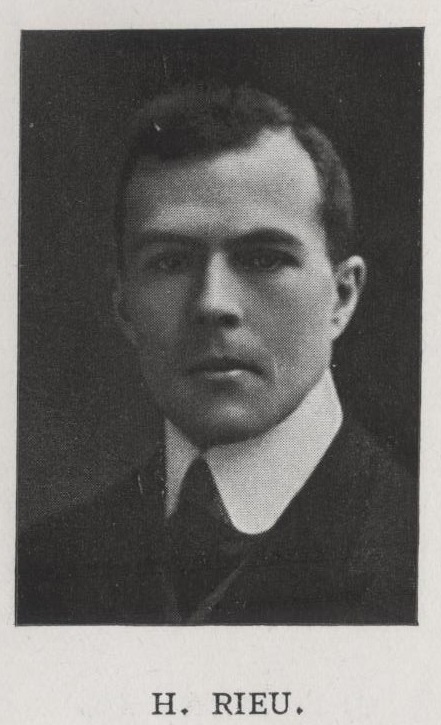 Henry was born on April 15th 1877, the fourth of seven children born to Charles and Agnes Rieu. His father, the Keeper of Oriental Manuscripts at the British Museum and Professor of Arabic at Cambridge, was originally from Geneva, and only became a naturalised British citizen in 1890, when Henry was 13 years old. He joined Dulwich in 1892 from University College School in Hampstead and was a pupil for five years. During his time at the College he was a boarder in Ivyholme and in his final year, 1896-7, was a member of the 2nd XV. From Dulwich he went on to Caius College, Cambridge, where he took a degree in Modern Languages, graduating with a first in 1900. After spending a year abroad, he returned to take up employment as a teacher, originally working at Chigwell School. After two years there he moved to Merchant Taylors’ School, where he would go on to work for over a decade.
In September 1914 Henry left his position at Merchant Taylors’ to enlist in the Public Schools Battalion of the Middlesex Regiment. He spent just over a year in England before being sent over to the front for the first time in November 1915. Less than three months later, on January 30th 1916, he was killed in action at Cambrin, near Bethune.