Croisilles British Cemetery. I A 5

Born in Streatham on 12th February 1891, Henry was the second child, and first son, of Thomas, a wine merchant, and Harriet Elizabeth Richards. He joined the College in 1904 and spent time as a boarder in Elm Lawn before leaving in 1907 whilst a member of the Upper 3rd, to continue his education in Geneva. After leaving the College he became a draper, brewer, wine merchant and was an underwriting member of Lloyd’s of London.

Following the outbreak of war he enlisted as a private before being commissioned in 1915 as a 2nd Lieutenant in the 3rd Battalion Queen’s (Royal West Surrey) Regiment, in an application which was supported by the Rev. W R M Leake, Assistant Master at Dulwich College. He underwent a medical examination where it was recorded that he was five feet nine inches tall and weighed 10 stones before embarking for France in May 1915.

In July 1916 Henry was wounded in the right calf by machine gun fire. He had one bullet removed in Rouen before being evacuated back to England where he had a second removed. After a period of recuperation a medical board passed him fit for active service:

‘The wounds are now quite healed. There is still slight swelling of the foot after walking and the circulation is not fully restored–his nervous system is below par–is restless, not sleeping well–should be fit for some duty in a month’s time’.

He returned to France in March 1917 only to be killed in action a month later at Croisilles, in the Pas-de-Calais, on 2 April 1917. He is buried there at Croisilles British Cemetery. In an interesting postscript, in 1936 a letter arrived at the War Office:

‘Dear Sir, We are sorry to trouble you but we have here a gold pencil with a bullet in one end and the pencil is engraved “Lieut. H.H. Richards, wounded by this bullet on the Somme, July 15th 1916”. The pencil was found in the Club Enclosure at Lewes races, August 7th 1936. As, no doubt, the pencil has great sentimental value, we shall be obliged if you can kindly put us in touch with Lieut. Richards or any of his relations’.

We are indebted to John Hamblin for kindly sharing his research, which has enabled us to expand this biography. 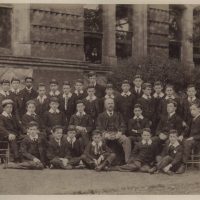