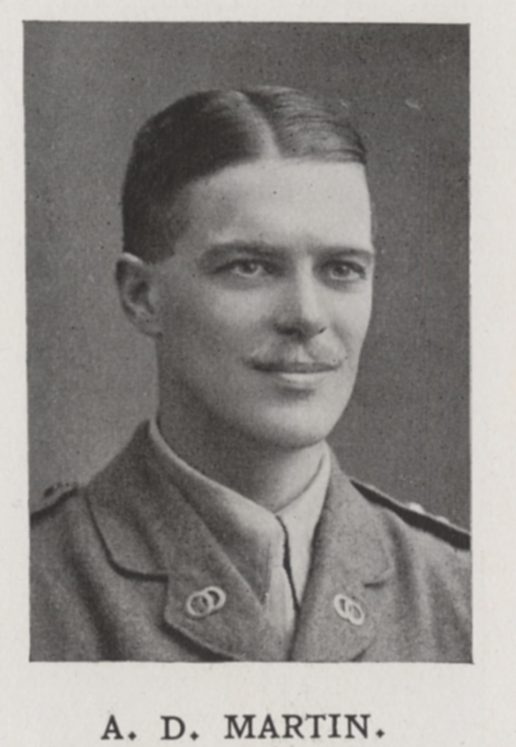 Born on July 16th 1885, Arthur was the son of William Martin and his wife, Mary. He came to Dulwich in the summer of 1898, and was the third of three Martin boys to do so, having been preceded by his elder brothers, George and Russell. He was at the College for the next six years, until the summer of 1904, and in his final year was a member of the 1st XV and the cricket 2nd XI, as well as being captain of fives, and an editor of The Alleynian. From Dulwich he went to Sandhurst and was a cadet there for a year before passing out in 1905 to take a posting with the Indian Army. He was promoted to Lieutenant in 1907 and the following year was made Adjutant of the 36th Sikhs, a position he was to hold for the next four years, before being promoted to Captain in the summer of 1914.

At the outbreak of war Arthur was sent to China, where he served during October and November 1914; he was mentioned in dispatches for his role in the capture of Tsing-Tao on November 7th. In the spring of 1915 he returned to India, and that August went over to France, attached to the 47th Sikhs. He served through the battle of Loos before leaving, along with the rest of the Indian Expeditionary Force, for Mesopotamia that December. He was recommended for the Military Cross by his superior officers for his work during the assault on the Dujailah Redoubt on March 8th, although ultimately nothing was to come of it. Just over a month later, on April 18th, he was killed during the battle of Beit Eissa, near Kut, whilst attempting to rally a group of broken troops on the right of his company.