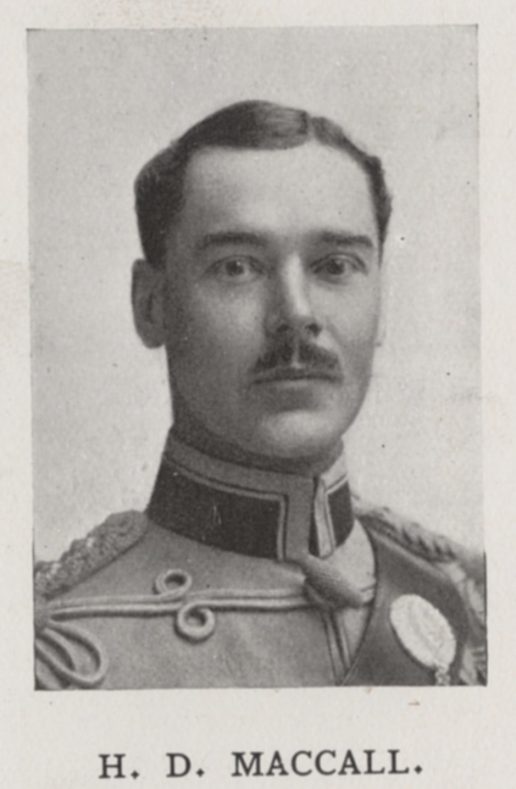 Henry was born on August 30th 1882 at Mussdorie, India, the second son of George MacCall, a Lieutenant-Colonel in the 8th Bengal Cavalry. He first came to Dulwich at the start of 1896 and left at the end of that year. He returned in September 1897 however, and this time went on to stay for just over two years, leaving for good at Christmas 1899. During his time at the College he was a boarder in The Orchard. After leaving he took a commission in the Loyal North Lancashire Regiment, and saw significant service in the Boer War, being awarded the Queen’s Medal with five clasps. In 1902 he transferred to the Border Regiment, and two years later was promoted to Lieutenant, before transferring once more in 1905, this time to the Indian Army. Henry was posted to the 33rd Punjabis, and acted as part of the North West Frontier Force, including taking part in the Mohmand Expedition of 1908. In 1910 he was promoted once more, to Captain, and the following year acted as bodyguard to the Commander-in-Chief of the Indian Army during the grand Imperial Durbar at Delhi.

The outbreak of war in 1914 saw Henry and his unit sent to Egypt where they spent some time on duty around the Suez Canal before being sent to France in 1915. Later that year, on September 25th, he lost his life whilst leading an attack on the German trenches during the Battle of Loos. Eight other OAs died that day, in what is believed to be the worst day for the College in terms of losses, not just of the war, but in its entire history.