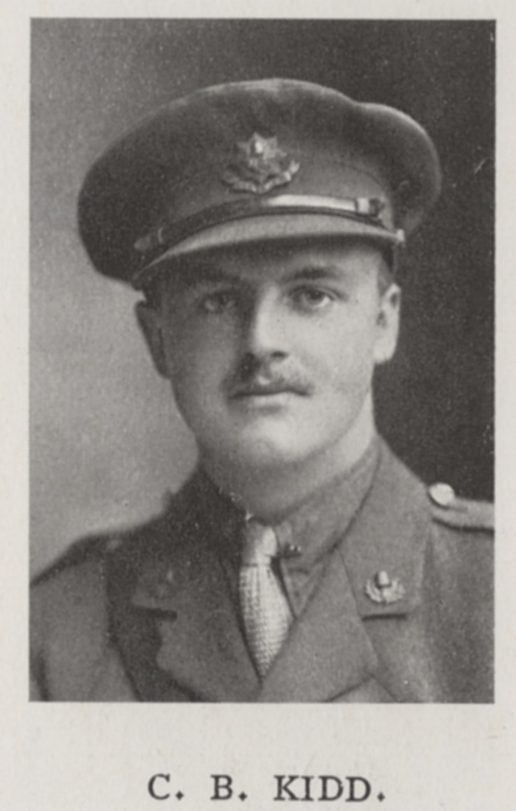 Claude was born on June 11th 1896, the fourth of eight children, born to shipbroker Charles Kidd and his wife, Amy. After spending two years at the Prep, he came to the College in February 1907, by which time his elder brother, Cyril, was already an OA, and his younger brother, Charles, would go on to join shortly after Claude left in the summer of 1912. After leaving he joined his father’s firm, and was also heavily involved in the OAs, being a part-time groundskeeper during the summer months, as well as a regular member of the Gymnastics Club.

Upon the outbreak of hostilities in the summer of 1914 Claude enlisted as a Private in the Artists Rifles, going on to take up a commission in the Cheshire Regiment around nine months later, in May 1915. That December he was promoted to Lieutenant and the following month was sent over to the continent for the first time. This stint at the front did not last long, however, as he was invalided home in May 1916, suffering from a serious bout of trench fever. He rejoined his unit around two months later, only to be forced to return to England once more by a wound suffered near Arras on October 11th. He returned to France again in May 1917 and that August was awarded the M.C. for keeping his men together whilst holding a position at Vendeuil, near St. Quentin; the same month he was also promoted to Captain. On March 24th 1918 he lost his life, whilst leading his men into action near St. Quentin, and is commemorated on the Pozieres Memorial.