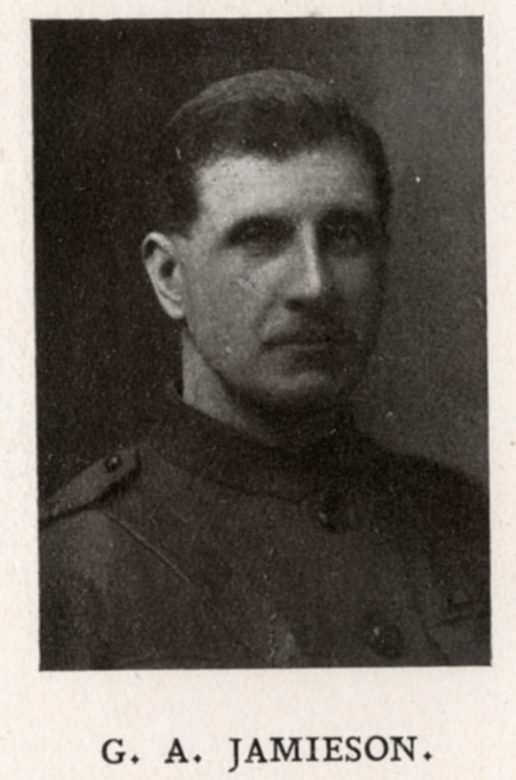 Born on November 3rd 1876 in Bombay, India, Gerald was the son of Alister Jamieson, a Colonel in the Indian Army, and his wife, Geraldine. He was a student at Cheltenham College for a time before coming to Dulwich in March 1888; he was only at the College for only nine months, leaving that Christmas whilst a member of the Upper Third. From Dulwich he went on to study in Heidelberg, before returning to England to take up a position at the Royal Military Academy, Woolwich. After passing out in September 1896 he joined the Royal Artillery and was promoted to Lieutenant three years later. Having served in Burma and India he was reassigned to the Indian Army in 1901, attached to the 16th Cavalry. A further promotion, to Captain, followed in 1905, after which he was attached to the Camel Corps, with whom he was mentioned in dispatches for his role in the Mohmand Campaign of 1908. In 1912 he transferred regiment once more, this time to the 9th Bhopal Infantry.
In September 1914 Gerald, who had been promoted to Major shortly before, was part of the 1st Indian Contingent sent to Europe for the war, travelling as the second in command of his regiment. During his time in France he was mentioned in dispatches once more, before being invalided out for a period as a result of being wounded. In late 1915 he rejoined his regiment, who were by now posted in Egypt, and proceeded with them to Mesopotamia shortly afterwards. In January 1916, whilst serving in Mesopotamia, he was severely wounded once more, and therefore invalided to India. He did not recover, however, and passed away as a result of his injuries in hospital in Bombay, on February 24th 1916. He was survived by his widow, Ruth, and their two children, daughter Frances and son Alister.