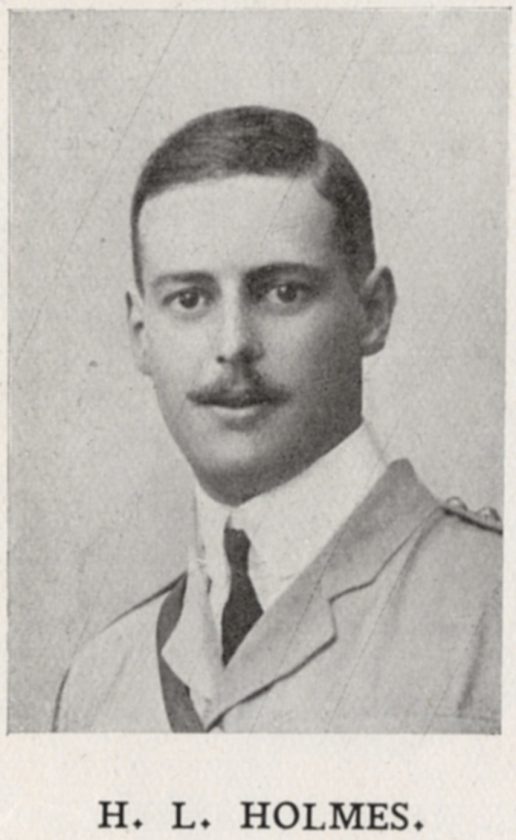 Born on March 22nd 1883, Hubert was the son of Percy Holmes, a retired Major-General in the Indian Army, and his wife, Evalina. He joined the College from Streatham School at the start of 1897 and was joined at Dulwich a year later by his younger brother, Guy. Hubert was a pupil for three years, leaving at the end of 1899, whilst a member of the Army Class, in order to attend the Royal Military Academy in Woolwich. He passed out in the summer of 1901 to take up a commission in the Royal Garrison Artillery, being promoted to Lieutenant in 1904. Five years later he followed the career path of his father by transferring to the Indian Army, and a year after that, in July 1910, was promoted to Captain.
After the outbreak of war Hubert and his regiment were sent to Mesopotamia, but shortly afterwards he was badly injured and invalided back to India. He was to remain in India for the rest of the war, mostly engaged in the business of recruiting, and in the summer of 1916 was promoted once more, to Major. In April 1919 he returned to England on leave, but was already seriously ill, and passed away a week after his arrival from the combined effects of pneumonia and influenza, being buried alongside his father in the churchyard of St. Luke’s in Whyteleafe. His younger brother, Guy, was killed the same month, in a motor accident in Brighton.