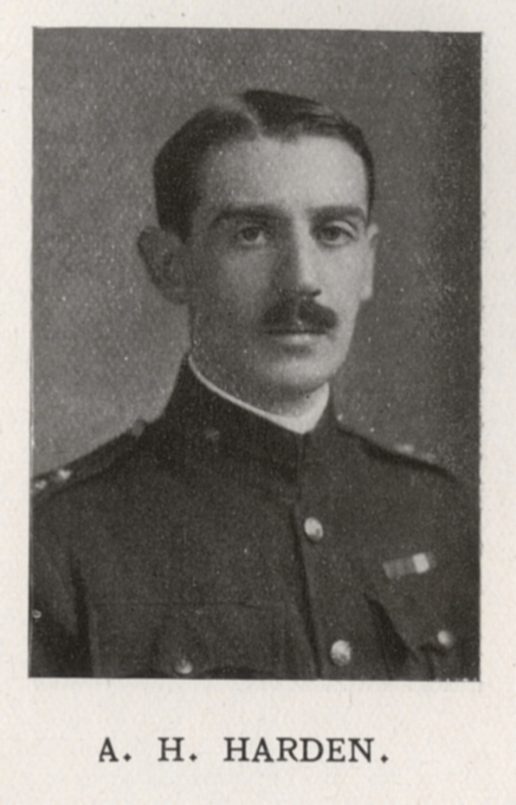 Allan was born on March 23rd 1881, the son of Lieutenant-Colonel John Harden of the 109th Foot, and his wife, Alice. The family moved around regularly during his childhood, spending time in Hampshire and Essex before, starting in the spring of 1895, he spent six months as a pupil at the College. In 1899, several years after having left, he joined up as a member of the Middlesex Regiment and went to South Africa to fight in the Boer War. Two years later, in 1901, he was granted a commission in the Oxford and Bucks Light Infantry, with whom he served through the rest of the War, and was promoted to Lieutenant in 1903, shortly after its conclusion. In 1908 he was made Adjutant of the 6th Battalion South Staffordshire Regiment, a role he held at the time he was promoted to Captain in 1910. In 1912, having served as an adjutant for four years, he returned to the Oxford and Bucks, who were by this time staged in India.
When the war began in the summer of 1914, the Oxford and Bucks Light Infantry were part of the first British Expeditionary Force sent to the continent, meaning that Allan was present during the Retreat from Mons, and indeed was later mentioned in despatches for his conduct during this period. On October 21st 1914 he was killed by a sniper’s bullet at Langemarck, near Ypres, whilst leading his Company into action. He was survived by his widow, Anne, and their two children, John and Daphne.