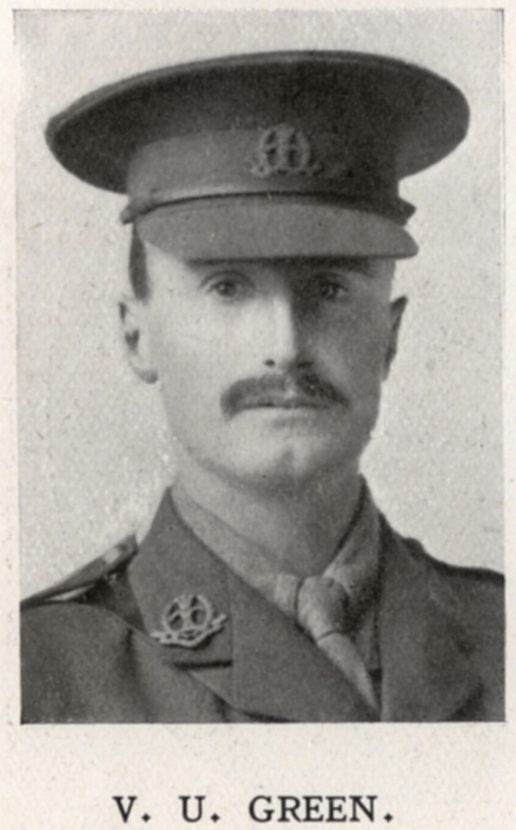 Vivian was born on August 29th 1883, the fifth child, and third son, of wine merchant Edward Green and his wife, Annie. He started at the College at the beginning of 1895, alongside his elder brother Edward. He was a pupil at the College for the next five years, leaving at the end of 1900, whilst a member of the Remove. After leaving he took up a position in the City of London, working for the Office of the Commissioner of South Africa. He was a committed member of the OAs, serving as Captain of the ‘C’ XV during the 1905-6 season, before being forced to cut short his rugby career as a result of a weak knee. He was also heavily involved in the Dulwich College Mission, a charitable boys’ home in Camberwell, which his brother, Edward, ran during the period between 1905 and the start of the war. The brothers’ role with the Mission brought them close to Arthur Gilkes, then Master of the College, who later spoke very admiringly of both of them.
In August 1914, on his 31st birthday, he signed up as a member of the Royal Fusiliers, quickly being promoted to Lance-Corporal, and later going over to France for the first time in June 1915. Later that year he returned home to take up a commission with the Middlesex Regiment, and after a short time spent training at Cambridge, was sent to Ireland in January 1916. After several months in Ireland he went to Egypt that June, at first to Alexandria, but later spending time in Cairo and then the Suez. He was subsequently involved in the advance on Palestine and was killed near Gaza on March 26th 1917. His elder brother, Edward, was killed later that year whilst serving at Ypres.