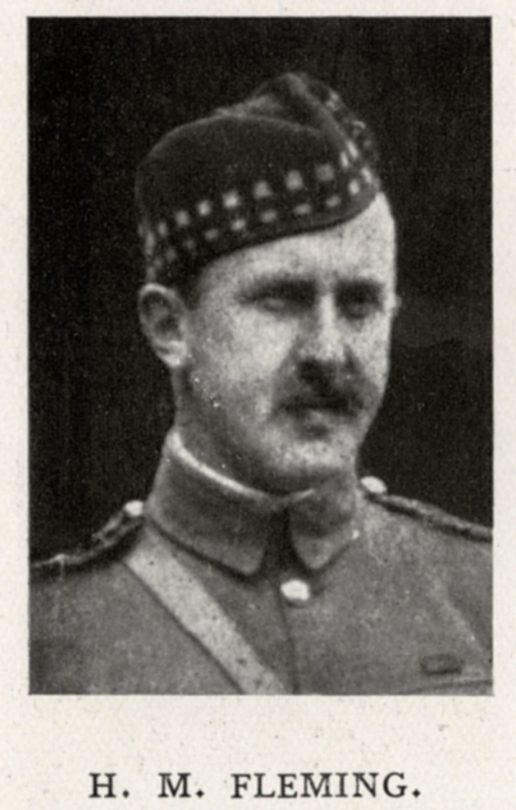 Born on March 4th 1876, “Toby” was the youngest of seven brothers born to Malcolm Fleming, a merchant who had close ties with India, and his wife, Mary; all seven boys attended Dulwich. Toby joined the College from the Prep at the start of 1889 and went on to distinguish himself greatly during his College career. In 1891 he was school champion in the race walk, in his penultimate year he was vice-president of the Debating Society, and in his final year he was an editor of The Alleynian, and a member of the rugby 1st XV and cricket 2nd XI. During this year he also won a medal representing Dulwich at the Public Schools fencing competition at Aldershot, and shortly after he left presented a Challenge Bowl for fencing which was to bear his name. He at first went to Argentina, where he was a rancher, but sailed to South Africa in 1900 to enlist in the Boer War as a member of the 2nd Brabant’s Horse. He was invalided out after only a year in service, but remained in the Cape Colony for the next decade, once more taking up a position as a rancher. During this period he took three mule trips across the Kalahari, in order to see the conflict between Germany and the Herero people, and also spent time serving as a newspaper correspondent at the Russo-Japanese War. In 1910 he moved to Vancouver, and whilst there signed up as a militia member of the Seaforth Highlanders.
Upon the outbreak of the war Toby was placed in command of a company of the 16th Canadian Scottish, who came to England with some of the earliest of the Canadian contingent in the autumn of 1914. In February 1915 he was sent to the front for the first time, serving in the sector around the Ypres salient. It was in this sector, whilst leading a counter attack on an area known as “Kitchener’s Wood”, that he was killed, on April 23rd 1915.