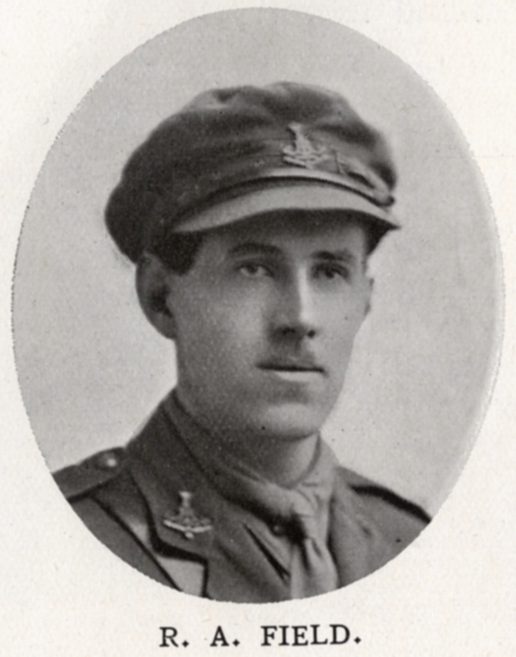 Born on March 13th 1895 in Wimbledon, Robert was the eldest son of hat manufacturer Joseph Field and his wife, Frances. Having originally attended Rokeby School in Wimbledon he subsequently came to Dulwich at the age of fourteen, spending three years at the College before leaving in the summer of 1912. He went over to Canada, and was farming at Clearwater, a small town in Manitoba, by the summer of 1914.
With the commencement of the conflict that summer Robert returned to England, originally joining the Inns of Court O.T.C., before being offered a commission in the Yorkshire Regiment in March 1915, going out to France for the first time that August. During the battle of the Somme he was twice mentioned in despatches, and in December 1916 he was awarded the M.C. for his conspicuous gallantry during the battle. By this time he had already been promoted to Lieutenant and was serving as Bombing Officer for his regiment; a short time later, in March, he was to be promoted once more to Captain. On April 2nd he was leading his men into battle at Henin, near Arras, when he was killed, at the age of 22.