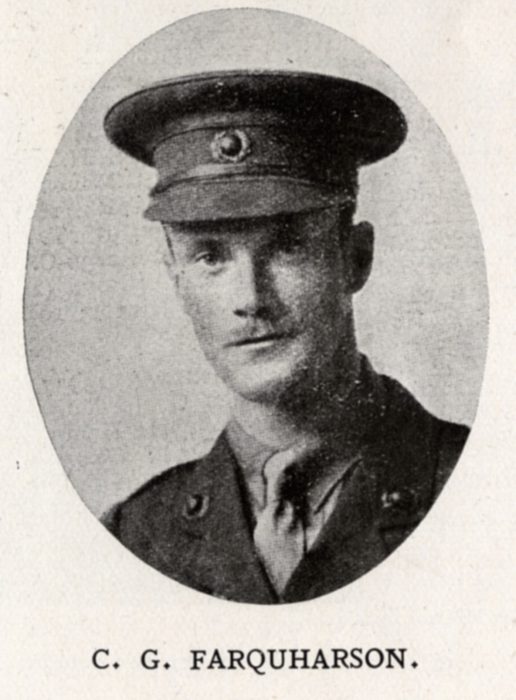 Born on July 24th 1884 in Gosport, Hampshire, Cecil was the eighth of nine sons who were amongst fourteen children born to Matthew Farquharson, a Colonel in the Royal Marines, and his wife, Emma; four of his older brothers, along with his younger brother, were also to go on to attend the College. After leaving Dulwich he went to the Royal Naval College, Greenwich, passing out the following year, 1902. Upon doing so he joined the Royal Marine Light Infantry, at first being gazetted as a 2nd Lieutenant, before being promoted to Lieutenant the following year, and Captain in 1913.
When the outbreak of hostilities occurred he was at first serving with the Grand Fleet, before, in 1915, joining the Royal Marine Brigade who took part in the Gallipoli campaign. Cecil was made adjutant of one of the battalions during the evacuation and ultimately went on to be mentioned in despatches for his services during this period. After a period in Salonica, he was sent to France, where he was severely wounded at Beaumont-Hamel and as a result invalided back to England for several months. Whilst in England he got married, to Winifred Usher, and was offered staff employment, although he turned this down in order to return to the front line. During the early part of 1918 he was promoted to Major, before going on to serve as Lieutenant-Colonel due to the wounding of his superior, and was also awarded the Military Cross. On March 22nd he was inspecting his men in a front line trench near Albert when he was hit by shrapnel and taken to a casualty clearing station, where he died as a result of his wounds two days later. His elder brother John, a fellow OA, had also been killed in action in November 1914.