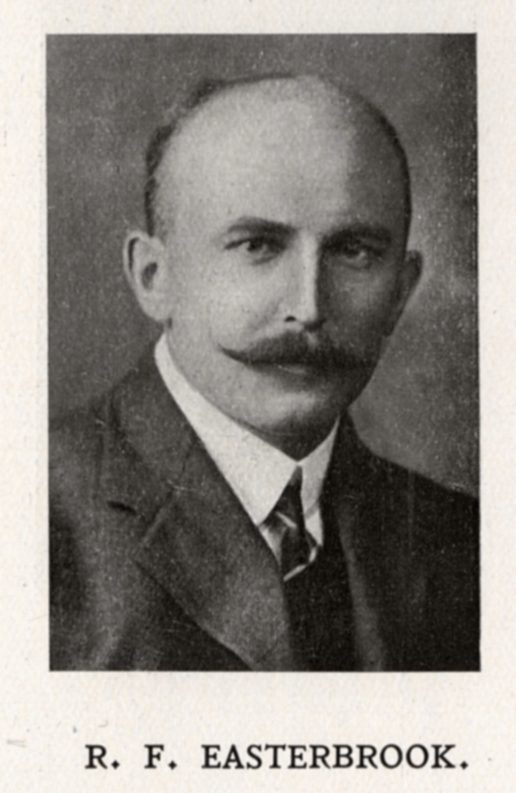 Ronald was born on February 23rd 1870 in Lasswade, near Edinburgh, the son of Thomas Easterbrook and his wife, Caroline. By the time he started at the College in January 1882, at the same time as his elder brother Alec, the family were living in South London. Whilst at Dulwich he was a prominent sportsman, in his final year being part of the first teams in both rugby and cricket. After leaving he took a job in the London Stock Exchange, and was also a member of the London Scottish rugby team, ultimately going on to serve as Honorary Treasurer of the club for a time. In 1907 he went to Canada, where he spent the next several years as a fruit farmer near Vancouver.
Ronald was still in Canada when war was declared, and attempted to sign up as a member of the Canadian Expeditionary Force, but was at first refused on the grounds of both his age and poor eyesight. In late 1916 however, due to his technical expertise, he was signed up as a member of the Inland Water Transport division of the Royal Engineers. After first sailing to England, he was subsequently sent to Mesopotamia in February 1917, serving near Basra for several months before being invalided to India suffering from sandfly fever. Although not truly recovered he returned to Mesopotamia in May 1918, serving out the rest of the war there. On April 12th 1919, whilst returning to India en route home after peace was declared, he passed away from illness when still on board ship, being buried in Bombay. He was survived by his widow, Emily.