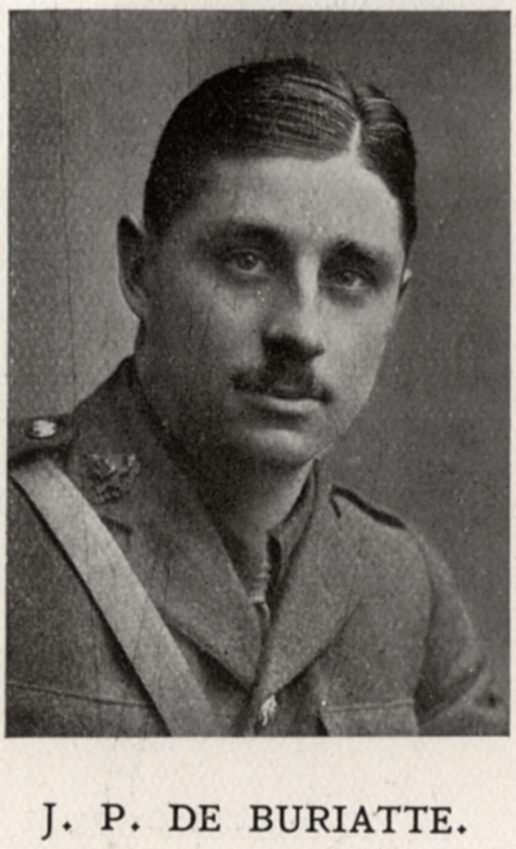 Born on October 28th 1887 in Aylesford, Kent, John was the second son of William de Buriatte, a paper mill owner, and his wife, Mary. By the time he was four the family had already moved to Wraysbury, in Berkshire, where his father had founded a new paper mill. He began his education at Slough Secondary School before, in 1901, coming to Dulwich, where he was a boarder in Blew House. After leaving he spent a year studying in Germany, before going to Manchester University, to study paper making. In 1908 he was awarded a certificate in Technology (Applied Chemistry), and subsequently joined his father’s firm, by whom he was sent to the U.S.A., in order to gain experience in working methods. In 1912 he joined the Artists Rifles, and soon distinguished himself as a bayonet fighter, being selected as part of the regimental team to compete at Olympia in 1913.
On October 28th 1914, John’s 27th birthday, he went over to France for the first time whilst still a member of the Artists Rifles, having just been promoted to Sergeant. In late February of the following year he took a commission in the East Surrey Regiment, joining up with the 2nd Battalion on March 6th. Six days later he had just led his men over the top at Lindenhoek, near Neuve Chapelle, when he was shot in the head by machine gun fire, and killed instantly.