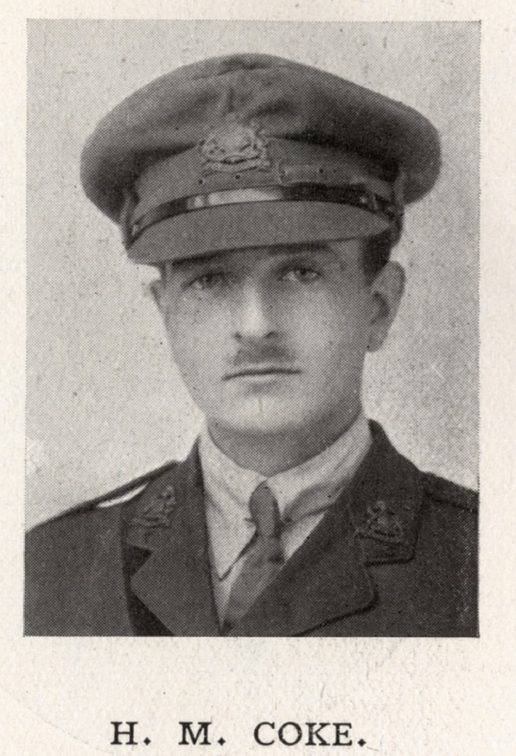 Harry was born on December 9th 1886 in Barnes, the eldest child, and only son, of Matthew Coke and his wife Annie. In 1908, five years after having left Dulwich, he married Lily Maltby, with whom, not long after, he had a son, Cyril, who was born in Blackburn. The family soon moved out to Canada, spending time in Montreal, but by the outbreak of War were back in England.
He enlisted not long after the declaration of war as a member of the Manchester Regiment, and underwent training in Lancashire. The next year Harry was transferred to the Artists Rifles, largely at the behest of his father, who had served in that regiment for many years. Upon taking his commission in July 1916 however, he returned to the Manchesters, and shortly afterwards went to the front for the first time. That winter, as a result of the severe weather conditions, he contracted trench fever, and as a result of further complications was invalided home. He took part in some duties for the rest of the war, largely in England, although on a couple of occasions in logistics in France, but was never passed well enough to return to the front, and indeed continued to suffer from complications related to his illness. As a result of this he subsequently underwent a series of operations in Leeds, but developed tuberculosis – eventually passing away at a sanatorium in Southbourne, near Bournemouth, on July 31st 1920.

We have no Home Address details for Coke, HM. Are you able to help? If so, please contact us.

We have no Memorial Location details for Coke, HM. Are you able to help? If so, please contact us.