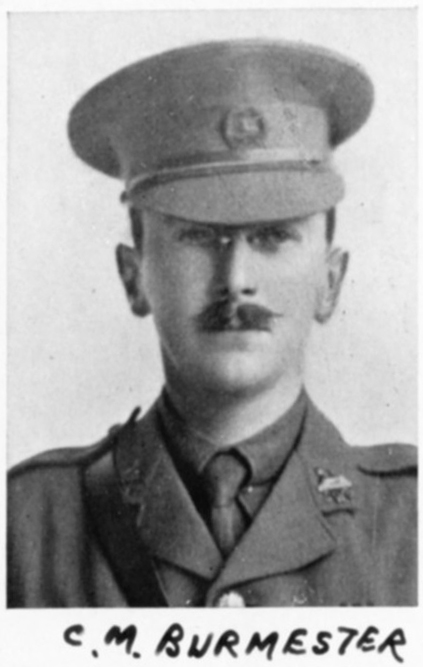 Charles was born on October 23rd 1875, the son of Walter & Florence Burmester; he very much came from a military family – with his father, grandfather, who was killed in the Indian Mutiny, and great-grandfather all having been members of the Army. Whilst at the College he distinguished himself as a sharpshooter, being a member of the Shooting VIII for 3 straight years between 1892 and 1894, and in 1893 was the first Dulwich boy to earn a perfect score for a round in the national Ashburton Shield competition at Bisley. After leaving he spent time working as a clerk at a shipbuilding company in Bremen, Germany, before, in 1899, following in the family tradition and joining the Army, with whom he went out to South Africa. After serving with distinction during the Boer War as a member of the Berkshire Imperial Yeomanry he remained in southern Africa for several years, working in government offices. In 1909 he moved to Vancouver, where he worked as a financial broker, as well as founding and editing a magazine called The Old Country Man.

Upon the declaration of War he once again signed up, at first with the Tyrone Regiment, before joining the 16th Canadian Highlanders, with whom he was promoted to Captain in February 1915; in September 1916 Charles was transferred again, this time to the South Wales Borderers. His skill as a marksman meant that for much of the War he was kept away from the front, instead serving as an Instructor in Musketry, but in April 1918 he went to France for the first time, being attached to the Shropshire Light Infantry. He was seriously wounded at Cambrai, and passed away in hospital near Bergeres on October 8th. He was survived by his second wife Adolphine, and daughter from his first marriage, Phyllis.