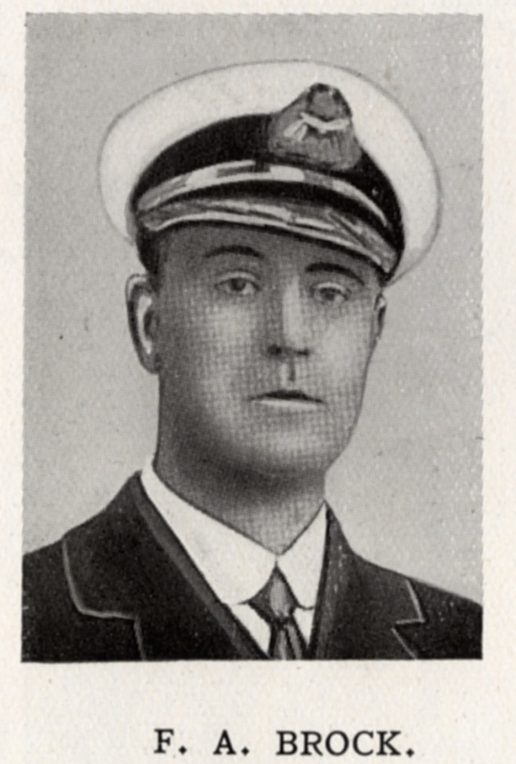 Frank was born on June 29th 1884, the eldest son of Arthur Brock and his wife Ann. He began a family tradition by attending the College, as all five of his younger brothers would go on to become OAs as well. After he had left Dulwich he took up a position in the family fireworks company, eventually, in 1910, being made a director of the firm.

Once War had begun he took a commission in the Royal Artillery, subsequently working with the Royal Naval Air Service on the planning of a bombing raid on Friedrichshafen. The raid was a success and he joined the R.N.A.S. on a more permanent basis, quickly qualifying as a pilot and progressing through the ranks, rising to the position of Flight-Commander in 1916, and Wing-Commander not long after that. Frank was on the Admiralty Board of Invention and Research through the majority of this period, and also helped to found the Royal Naval Experimental Station at Stratford; it was as an inventor that he was to rise to particular prominence, often putting his experience and expertise in the world of pyrotechnics to a military use. Amongst the innovations he was behind were Dover Flares, used in anti-submarine defence, the Brock Colour Filter, and, most prominently, the “Brock Bullet”, which was designed to bring down Zeppelins by causing them to catch fire upon impact. In January of 1918 he was awarded the O.B.E. in honour of his contributions to the wider War effort. Later that year he was heavily involved in a major raid on Zeebrugge, which took place on St. George’s Day, 23rd April; he had not only been the creator of the smokescreen which was used to disguise the arrival of British forces, but also commanding troops on the day – it was to be his final action. During the Raid he went ashore as part of a small party, and was last seen leading a charge on the breakwater of Zeebrugge Harbour. His final fate is unclear, and indeed he has no known grave, although some accounts indicate that he may have been the British officer who was reported killed during a swordfight with German sailor Hermann Kunne. His role in creating the smokescreen for the Raid led not only to a mention in dispatches, but also a personal commendation in Parliament from the First Lord of the Admiralty, Eric Geddes. He was survived by his widow, Gladys, and their two children.