During 2019 Dulwich College celebrated the 400th anniversary of its Foundation in many diverse ways. The aim was to mark this important milestone in our history by the creation of works of art, our landscaping of the front lawn and a restoration of the Barry Buildings. A significant project was the commissioning of a set of seven wood-engravings. In the lead up to our 400th year a group of the finest contemporary wood-engravers working globally visited the College to both research and deliver workshops and talks. They each designed and made a bespoke wood engraving inspired by their exploration of the life, history and heritage of the College.

Neil Bousfield is a British artist working in relief printmaking and contemporary wood engraving. The piece he created, as part of the Dulwich400 project, is Leslie Paton: Memory and Places. It was displayed, with the work of the Dulwich College pupils and the six other commissions in an exhibition at the College, during the Michaelmas term 2019, Phoenix and Unicorn, which celebrated the life and work of Old Alleynian, Thomas Sturge Moore, a poet and engraver (1870-1944). 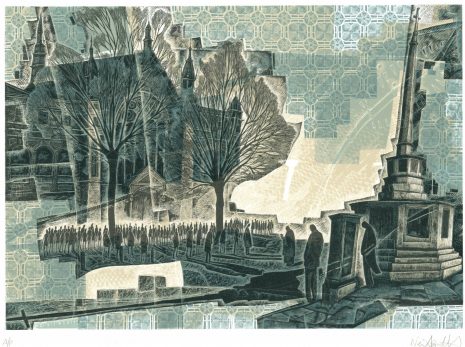 Neil Bousfield described his piece in the following statement:

“My work is particularly focused around the ideas and approaches to ‘place’ and ‘place making’ experiential narrative and historical narrative can impact upon the process. During my visit to the College I was very interested in how the boys spoke about the History project which involved researching a name upon the war memorial. This space also seemed to resonate, and the placing of the memorial within the setting of the College where so many young people start to shape their lives seemed particularly poignant.

The work I made obviously focuses upon this particular aspect of the College and the patterns are from drawings I made of the ﬂoor within the main buildings. I wanted to mention that as part of my research I drew inspiration from Leslie Paton who left Dulwich College for Sandhurst, and became a 2nd Lieutenant in the Royal Scots. He joined his regiment and was sent to France in February 1917; a few weeks later he was killed leading an attack on the German lines near Arras at the age of 19. I used maps of where he lived and maps of the front lines and trenches where he fought within the overall design and the development of the work.”

Copies of Neil Bousfield’s print are available to purchase through the Dulwich College Commissariat.